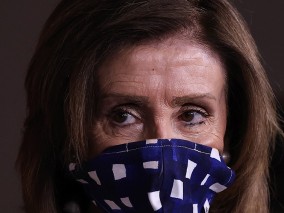 So, the Democratic controlled house passes the latest Corona Virus stimulus bill pretty much along party lines with a vote of 208 to 199. The $3 Trillion package, while including a second round of $1200 payments to individuals, also includes $915 Billion in bailouts to the states. Like most other spending bills coming out of Congress, this too smacks of political overtones and is largely a liberal wish list masked as Corona Virus relief.

For example, the state of California officially recognizes its unfunded pension liability at between $300 to $400 Billion, the real number is closer to $850 Billion and likely to continue eroding amid the collapse of the financial markets and the current climate of near-zero interest rates. Meanwhile, California forecasts a 7 percent return in their investment portfolio model required to meet pension obligations. In the absence of achieving this rate of return, shortfalls are made up by taxpayers.

This coddling of state and local government employees has got to stop. It is no secret that the generous retirement benefits afforded this group of workers is way out of proportion to the rest of us (taxpayers). Further, why are state pension recipients receiving $1200 stimulus checks. Has their monthly pension check been compromised by the pandemic? The answer is a resounding No! Why are they not asked to share in the pain that has been inflicted on non-government retirees whose IRA’s and 401K’s have been decimated and interest earning bank accounts have been reduced to nearly zero?

Why? Because the laws are being passed by liberal democrats pandering to their voter base. Further, these lawmakers are the beneficiaries of these generous retirement policies. The Lion’s share of this stimulus money should be directed to those that need it the most – mainly unemployed private sector workers and those whose main source of income has been impacted by the pandemic rendering them unable to feed their families, pay their rent, and purchase health insurance no longer provided by their former employers.  Instead we will now send another round of $2400 payments to most married couples, many of which, are still earning their pre-Covid19 income.

Retired produce industry executive. Active investor and devoted father and grandfather to my two sons and five grandsons. All made possible by over 50 years with the love of my life Alexis, aka Sandi. View all posts by wjexchange